April 18th, 2010, 4:35pm is when we landed at one of Caribbean’s most mysterious place, Cuba. “Yes!!! finally made it here.” If you would have asked me, before I started my trip, where am I most excited to visit, you would definitely hear me scream loudly Cuba! A place where Americans are forbidden to visit, and one of the few remaining communist countries in full operation. Old American cars from the 1950’s are a normal street occupants and cigar smoke is a common encounter.

Viva Havana Cuba! “Scarred by its past and flummoxed by one of the worst economic fallout of modern times, Havana is no Paris. Here, at the provierblar heart of Cuba’s great paradox, seductive beauty slides up to spectacular decay, as life carries on precariously and capriciously, but always passionately.”
Havana, definitely a very passionate, loud and proud city. Driving in a cab to our “casa de perticulares” in Havana, Vieja, we were totally psyched and super eager to jump out and start touring. But before we did all that we came across a very funny situation.
“Hola tienes un habitacion, para dos personas?” as we screamed at a woman who was looking out the second floor window, she disappeared and came back shortly with keys flying from above. “hahah this is just like Poland” Iza laughed. As we entered the red living-room an older man shows us our room, “It’s 30 CUC per night and breakfast is not included”.
“cool we take it” after a short Spanish talk he asked us where we were from and here is the shocker.
“ohh dzień dobry, ja studiowałem w Polsce w Gdańsku przez 5 lat, od 1973 do 1978 roku.”
Perfect polish with a slight accent. “WHAT?” this is totally something else. A Cubano who lives in Cuba, studied for 5 years in Poland, and speaks perfect Polish!! Awesome, after he left our room, Iza had to lay down and overcome her emotions. Lol. Totally something we did not expect to come across but it made our stay more pleasant. After talking to him a bit more he told us that back in the 70’s it was very common for Cubanos to travel to Poland and vs.
April, 19th, Havana:
Woke up early, and wow another shocker breakfast was on the table, hmmm i thought he said breakfast was not included. “Is this free?” “tak tak tak” so we had a huge huge breakfast, mango, guava, banana, papaya, piña, mango shake, hot coffee with hot milk, hot bread, omelet with veggies, and nothing else would fit I swear! Barely made it back to our room through the tall but super narrow door, we got ready packed our 4 lenses and took off to explore Havana.
We decided to follow Lonely Planet’s recommendation tour of Havana Centro. Click! We walked, passed different levels of eye stimulation and just clicked away with as many cars, buildings, and people that would fit into our frame of mind and cameras.
Red vintage Buick, click! 1958 blue Chevy click! three girls wearing the same color shirts, click! Cuban flag, click!
We walked for over 5 hrs. Seen everything and anything, flying baseball balls, crumbling side walks, hair buzzing, people rocking on chairs, dying and smoking cars, smiling and screaming people, veering cyclists, blasting Mambo Kings in every restaurant and Che Guvera’s image on every corner.
Imagine architectural mosaic of tall colonial baroque, art deco, neoclassicism, and gaudi-esque experimentation buildings that are falling apart with multiple color paints showing through.
It’s like a once lived beauty that through years have not done anything to keep up her youth, resulted in grayness and broken bones, yet it still can dance till the sun shines.
“Wow, this place is something totally different, never expected it to be like this”.
“I love it, and I don’t know why.”
We ended our tour at the Malecon, a strip where all the locals hang out. As we sat down we were instantly approached by many people trying to talk to us with small talks and always with the same question “Where are you from?”. In minutes we had two Cubano guys singing and playing drums and a guitar for us. Click!! I took a pic.
We talked to them for no more than 5 min before the police approached them and checked their ID’s. Then they were told that they can’t sing and play here.
Just like that, for no reason “you just simply can’t play here”. I guess Fidel is really scared that we going to take these boys away. They were eager to share their music with us, but were not allowed. That freaking sucked, we were totally enjoying the armature tunes of Buena Vista Social Club.
April 20th, Havana
Another day and another walk tour, this time we decided to explore what all the tourist brag about in Havana, the Vieja. A neighborhood with amazing architecture, and tourists on every corner. True, it was very nice, many buildings were reconstructed, painted and looked brand new. However, we favored Centro and the more run down parts of Habna a bit more, it has a bit more of the everyday life and a true character.
In Vieja, we also felt that there were a bit more locals that were preying on tourists. We were approached couple times, and asked to give up our clothes, watches. I didn’t care until one lady asked me to give her my, ring that I bought in Taxco, with the eye of the cat stone, that pissed me off and I told her to get lost! C’mon!!! Not my ring! She is got to be crazy!!! We barely have anything!!
We ended our tour, at the beer factory with a pint local beer and one burger to share. Iza’s heart could not resist to give half of her half burger to a begging cat. Yep! Cuba has begging cats at the outside tables. Mexico has begging kids that just put their fingers into your food when you eat, and Cuba has cats, that almost dig their claws into your legs.
The day ended up similar to the first, somehow we end up checking out the sun set at the strip, smoking a Cuban cigar, when two guys approached us and wanted to talk and practice their English with us. No problem! But again, five minutes passed and police showed up, and were checking their ID’s. 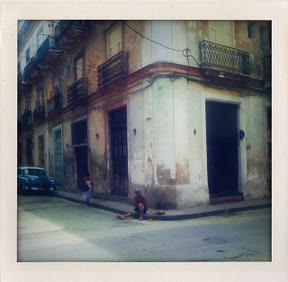 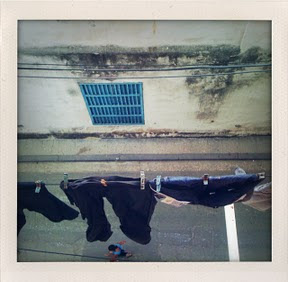 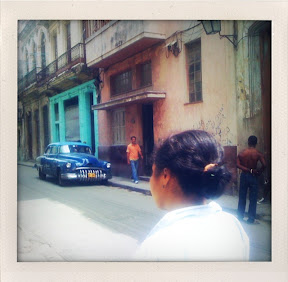 April 21st. Vinales, Cuba.
Vinales, 3.5 hrs west of Havana, a tiny city, with 14,000 people, surrounded by Mogotes, mountains with flat tops which are very rare in the world.
Vinales was recommended to us by Geraldo, our Polish Cuban padre. He said that it’s one of the best places in Cuba. So of course we had to check it out.
When we arrived on the bus to the small town Vinales, we were greeted by a mob of people trying to bring us to their casa perticulares, apparently there are over 250 houses that have rooms for rent.
“ohh shit Iza, look this guy has our names on a card board. Agnieszka and Izabela, lol”
It turned out that our padre called a friend, and told him we were coming. I’ve always wanted someone waiting for me with a cardboard and my name, but never expected it to be in Cuba. Hahah, love it!
After settling down, we took off to explore the area as its know for the national park that has many natural springs, caves and mountain climbing. Since the plan was to only come here for one day we were limited with our activities.
We hiked up the road for 3km, appreciated amazing views, checked out many local tobacco farms and just clicked away. Eventually, we made it to the top of the hill, where an expansive hotel was located and had an awesome view of the valley. We got trashed on two mojitos and on the way back came across a group of young guys who I convinced to jump with Iza, and I continued to click away.
When we got back to our casa, it was dark, and the food was on the table, ate like queens and passed the f… out.
Morning of day two in Vinalles, April 22nd.
We rented bikes from our casa to explore more as we had our bus to Havana at 2pm. We made it to the famous “Mural of Prehistorico”, a massive mural on the side of a mountain with snails, dinosaurs and sea animals that represents evolution. It took 5 years and 15 artists to complete it. We really don’t know why, as this should have taken 2 people and no more then few months 🙂
On the way back, far far away from our casa, my chain popped, it broke! Thank god for Iza and our Swiss Army knife, she got her hands dirty and with the use of our Swiss knife and two rocks she fixed it. It only took three tries to get the chain on right! Whoop whoop!! Freaking Cuban bikes. 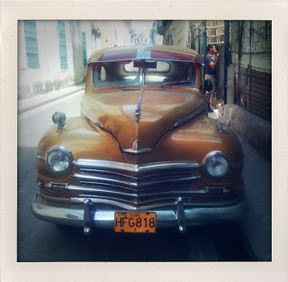 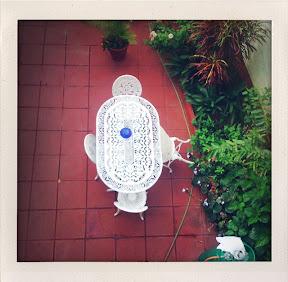 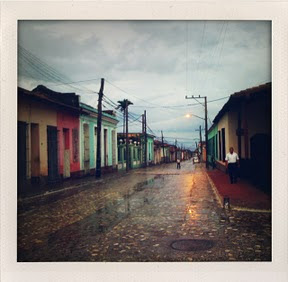 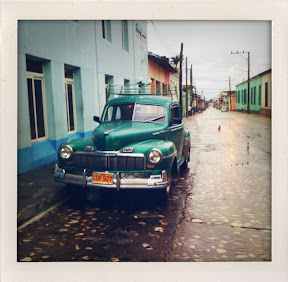 April 28th, Havana.
After we got back to Havana to our casa we asked our padre to lower our night rate as we had no more money for food. He smiled and offered us his dinner. “Sure all we really needed the money for was food so why not.”
Best dinner we had in Cuba.
“omg not only he speaks polish but he also knows how to cook”
We had cabbage/veggie soup, pulled pork with rice, delicious salad and flan for dessert. Again we walked away barely able to fit through the door.
April 29th, on the flight coming back from Cuba.
“I am scared to fly in this plain” Iza said with wide open eyes after finding out that it’s a Russian plane.
Apparently she thinks that all things made by Russians are not the best quality. And I think after this flight I have to agree with her.
When we sat into our seats, we quickly learned that the seats in front of us were easily folded in half, never seen that on a plane but I liked it as it gave me more room. Also there was a cold air coming out through a ventilator right by my foot, didn’t think much of it until we took off.
“what in the world is going on!!” i said, while a cloud of steam was rushing out from underneath our chairs. It was a thick cold steam. People in the back started to whistle to get the flight attendants attention. Shortly after the pilot got on the air and said not to worry about the steam that this is perfectly normal.
“Perfectly normal!?!?! I’ve never seen anything like this and this is probably my 30th time on a plane!”
Iza was right. I was super happy when we landed. My friends when ever you learn that you will be fighting a YAK 420, be aware that thick steam that looks like smoke, coming from underneath your seats is apparently normal.
Quite an experience, I had to break the rule of not using any electronic devices and clicked away as this was proof just in case. 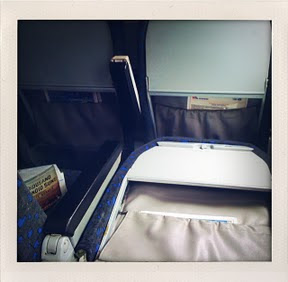 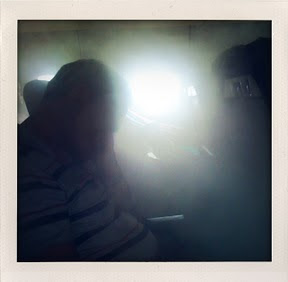 So, Cuba in a nutshell, I can’t fit it!! This is one of those places that you just have to visit for yourself. Is unexplainable. Make it there quick as things will change soon. 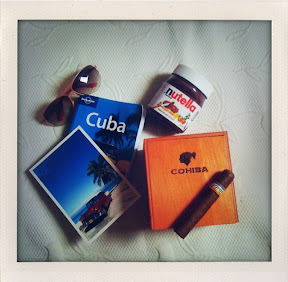 5 thoughts on “Cuba’s revolution is on every corner.”