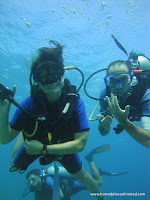 
from: Agnieszka
to: Fawz
date: Tue, Mar 15, 2011 at 11:32 PM
Re: You found me first !! I wrote you first.
…You have been running around in my head all day. What is up with that? Get out!! But wait stay a little longer, I like it. The boat ride back to Semporna was a dream and then some. All I was thinking about was the touch, the feeling and the warmth. I think, I like you…


from: Fawz
to: Agnieszka
date: Tue, Mar 15, 2011 at 8:00 PM
Re: You found me first !! I wrote you first.
…Actually I would love to just be on it!! I wish I had some more time to know you. Being with you was just amazing, relaxing, sensational and only good feelings. My flight is about to leave and I will have 14 hours to replay these last 4 days.


On the bus, my mind is full of vivid thoughts and feelings, that I have not felt in a while. A feeling of being wanted, excitement, and butterflies. A feeling you can’t describe but we all felt. My headphones are on and the music is memorizing, I gaze out the window with eyes wide open yet I don’t see anything I smirk occasionally and feel my heart sink.


It started quite simple, we were on a boat heading for diving in Borneo, Semporna one of world’s top dive sites. I was going diving and Iza snorkeling, one boat different activities and different people. We met two energized French guys who were putting up a feather show. One word led to a conversation that lead to “Lets go to Mabul Island together”. They were divers as well, I was excited to have some one to dive with. Iza, is a buddy for life but unfortunately not an underwater buddy, she decided to stay shallow.


I found a new underwater buddy and I was happy that someone had my back as I used my flippers to explore the underwater world of funky sea life. Frog fish, leaf fish, potato grouper, blue snails, giant muray eels and stone fish were just a few that we saw. With every other minute gazing at my buddy, I was safe, no more funky business of no buddy and loosing my weight belt like it happened in Honduras. I had a new buddy, an underwater buddy.


Much fun, lots of laughs, we all stayed at one of the longhouses on Mabul Island, one of the bigger islands around Semporna where gypsies from Philippines live illegally and smuggle Philippians rum. Staying in longhouse was quite new for us. A house which is a traditional dwelling of the indigenous people in Borneo and the islands most distinctive feature of tribal life. They are raised on stilts above water to keep cool and the bugs away. We had standard rooms with the toilet flushing to the water beneath us. Locals cruising slowly on their wooden boats while sleeping, cooking and who knows what else they did on the boats.


It was one of the French guys birthday, Tanguy’s birthday, we decided to celebrate with Mr. Captain Morgan, and later Miss Havana Club joined the party. After dinner and few drinks later, we were told that we might have to evacuate due to the tsunami that hit Japan earlier that day.


“What? A tsunami?” I asked, and the guy replied “Don’t worry, currently there is no danger at this point, if anything changes we will put everybody on the boats and evacuate the island.”


Really? wow, ok so I will continue to sip on this Captain Morgan and pretend that there is nothing happening. If I am going to sink, I want it to be as painless as possible. I focused my attention to getting to know my new buddy. But deep down inside I was scared, this is my biggest fear, when nature strike and we least expect it.


In the meantime Iza managed to occupy her time with the birthday boy who insisted on getting a massage for his birthday. This never fails whenever she says she is a masseuse everybody wants a massage. For FREE!!!! I am sure he had a happy ending in mind.


Happy it was, that night we all separated and had full on deep conversations that lasted all night. Only the next day, Miss Havana Club showed her anger and took it out on us, as my head was pounding and I think I was still feeling buzzed.


“Please pinch me!” Am I still alive? YES, I am alive, no tsunami! We packed our bags, completely clueless of the worlds news, we join our new friends on the next mission to the Pom Pom Island. While the rest of the world YouTube the horror of Japan’s 8.9 earthquake, that shifted the Island closer to United states.


Pom Pom Island, what I like to call paradise, is a small, tiny, island 40 minutes aways from Semporna, the guys founded we just followed. We stayed at Celebs Beach Resort, a place full of calmness, positive energy, unlimited diving, and relaxation, plus super comfortable beds. Best part, we were almost there alone, a group of other French people where spending their last night at the resort when we arrived. The rest of the days it was just us. I like to call this a dream vacation in paradise.


Paradise started when my buddy held me in his arms with care and confidence. My heart jumped and the butterflies magically appeared. I felt giggling and with care we kissed. I opened my eyes and his were already opened. Staring deep inside I quickly closed my eyes, as fear jumped in. Yet curiosity was stronger and I slowly opened up and allowed him in, deep into my soul, it felt good and new. I wanted to be squeezed tight and held forever. It was a feeling I didn’t feel in a while and it felt amazing. I was in full happiness and dreaming land. Sensual and surreal. I wanted to stay in bed all night and all day, feel the happiness of two people who magically end up on this paradise island. Love, Kiss, and Happiness. We were high above and we both liked it!


While next door, a different situation was forming. Walking on the walls, feet in the air, painful satisfaction and aggressive behavior was in the air. Similar to Goldfish and Koi mating. “Goldfish and Koi have very “active” sex lives. To put it in laymen’s terms, the male chases the female in a rather brutal show, literally to beat the eggs out of her. Then he fertilizes the eggs. This can be stressful to the female and can be a cause of injury. Many females, frantic to get away from their suiters, jump during this time and injure themselves against rocks or simply jump out of the water and onto the ground.”1 This will explain Iza’s next day slow painful movement. She was strangely satisfied.


For the next 3 days we lived life of underwater world, with unimaginable energy waves of desire. Iza was slowly approaching the same boat with Tanguy, a powerful fast boat. Their energies have attracted, and they took it out on each other. While I was sleeping deep in a dream, a dream that felt real. An energizer bunny’s love story.


Diving was the primary reason to visit Pom Pom Island, the resort had unlimited dives, we totally made use of that. I really enjoy the underwater world. A place with so many unique creatures, with special powers. My favorite is the octopus, which is among the most intelligent and behaviorally flexible of all invertebrates. They have the power to change colors to escape predators, this color-changing ability can also be used to communicate with or warn other octopuses. Some release a melanin ink to redirect predators which is the same chemical that gives humans their hair and skin color. I would like to be an octopus!


Underwater world is all about survivor, the big fish hunts for the medium fish, the medium fish hunts the small fish, and the small fish is fucked. They live in coral reefs where funky creatures really are funky. I am amused by coral reefs, a bouquet of sensitive colonies of tiny living animals that are endangered. Scientist believe by the end of the century the coral reefs will slowly disintegrate because of the rising acidity of the ocean caused by the build up man made carbon dioxide in the atmosphere. Additionally, the blast or dynamite fishing by using explosives or toxin to kill massive fish at once, damages the coral reefs and the ecosystem. Once coral dies there is no natural recovery of the reef. Lets save the coral reefs, and preserve the natural underwater world. Lets stop killing and lets become vegans! All living things should have the same rights! Sharing the world is caring, is a way of life.


On our last dive was near the Pom Pom Island where we went to Mandarin Playground. I say last because the following day my buddy was going to wake up form a dream, and face reality. He will be back in the office and Tanguy will continue his travels. I was fully buoyant, moving slowly observing all the dead corals, inhaling, exhaling releasing 100ths of bubbles to the surface, when my buddy grabbed me and signaled for me to take my regulator off. I did, he kissed me, an underwater kiss, salty lips, not breathing, I closed my eyes and floated…


…when I open my eyes we are still on the bus, 2 more hours to go and I want to fall back into my dream. Tanguy & Iza are dangerously up to no good, bus is speeding, kids are laughing, Muslims are talking and Tanguy is living his happy ending.