— Come, come! Come to Paris, it will be great, we can learn more about each other. Paris is a perfect trans hub for you and Aga before you go onto Africa. No worries about the living space; you can stay with me I live in the center of the action. No worries about the language barrier there are many foreigners who live in Paris and don’t speak French. I will introduce you to many people who will help you to integrate into the Parisian culture. Come Come. I miss you, I want to see you, I want to touch you. Buy the ticket and come. Lets try to live together and see if we can take the fun to another level— Gist from Cedric’s emails.There was not much convincing needed, Iza pressed the “submit” button on e-bookers and the plan was set — We are going Paris. — She said with a smile. — And the tickets are not refundable, for sure another spontaneous decision. Lets hope when he comes to visit me in Sri Lanka it will be a nice intro to Parisian life.


Before going back to Europe we had one last country to visit in Asia, Sri Lanka, where Cedric was going to join us for his winter break and together we were to explore what’s known as India’s teardrop.

Cheers for good times. Cedric is a nice guy, I like him, and he’s a unique character. He will sing you away to fantasyland and bring you back down before you’ll know it. — I said with a smile and confirmation to the uncertain decision.

This was a big detour for us; we never planned to go to Africa through Paris. Plans are meant to be changed.

REWIND
July 2011. Hanoi, Vietnam
Late night was approaching, members from the Hanoi CouchSurfing meeting were spreading ways and Iza’s target was set. The eyes met, greeting smile exchanged, flirtation in the air, preparation was set and the move was in place. They danced to the beat of modern tango; they embraced and pheromones allowed for the gymnastic lifts, kicks and drops. Perhaps it was the uniqueness of her style that attracted him to her or Saigon’s intoxication but he held on tight. A glance in the eyes and the epic began.

Few days passed, few emails down and the attraction screamed loud. The duo was so alike; love for travel, love for tennis, geography geeks, photography freaks, pornography leaks and the best of all was the kiss. It wasn’t long before we had madness on the overnight train to Sapa. Together we headed to the north of Vietnam, where their allure sprout high.

— Cheers to you guys — I raised the toast as we drank local Vietnamese rice vodka while the train swayed away.

August 2011. Beijing, China
“High Toddies Welcome to the Ground” said the sign that Cedric held up high. We landed in Beijing, a slight adjustment to the plans. We never planned on flying to Beijing, it was supposed to be an on land trip. — Hey plans are meant to be broken— I agree to Iza’s idea of coming down to Beijing where we met Cedric for his last week of travel. It sure was fun, a full week of happiness, exploration and admiration; they tasted China and each other. They were shinning, oblivious to the world in a twosome joyful maze. Ups and downs they cruised in China’s crazed. 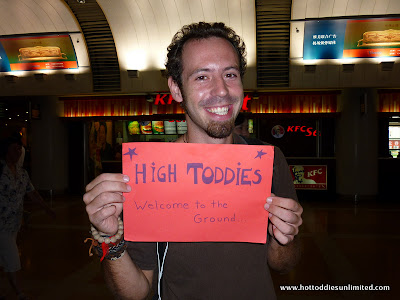 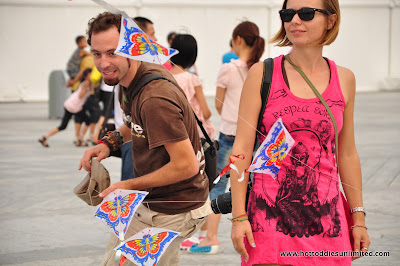 September 2011. Geneva, Switzerland
— I can’t believe that I am here— Said Iza while on Skype. She did it; she couldn’t resist her instinct and impulsiveness. She took the first flight available and joined Cedric in Switzerland. Nearly a week passed as the two separated and the desire only grew stronger. The sexy emails, the longed for energy, the needed touch all equaled to a happy conscious decision. The brain reacted to her heart desire, she flew down to see him.

— We are doing great, having fun eating chocolate and loads of Swizz cheese— She was happy it was a paradise getaway from the constant hustle and bustle of everyday travel, and most importantly a longed for reunion of passion.

The attraction took up a notch; the comfort zone expanded and the two were more at ease. Sensitiveness was added to the mix and the two baked up some future ideas. The good times rolled and before they knew it 10 days went by and it was time to say good-bye. Iza jumped back on track and Cedric landed in Paris for his reporter studies. 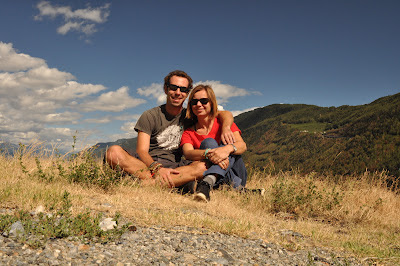 December 2011. Varkala India
Months slipped, waves crashed, plenty emails and more talks were flashed. Excitement was in the air; a change of scenery was near. India was approaching its end and Sri Lanka was brightening the day. — In two weeks we are off my dear, are you excited? Butterflies were spreading and anxiety was sharing. It was time for something new the three of us were going to unite and explore Sri Lanka.

—It’s been few days since I haven’t heard from Cedric— Iza’s concern was in the air. — I think something is wrong.

What can be wrong, I assured her that things are fine probably he is busy with his school work before the end of the semester.

But she was right, in the evening she received a message, a message that changed our entire perspective of Cedric’s being and his kindness.

In the message he freaked out, the thought of Iza living in Paris became unrealistic. “You don’t know the language, I think it will be difficult for you to find a job in Paris. I won’t have the time to help you, I will be in school and I also need to find a job. Maybe the idea of you coming down here is not that good after all.” It seemed to Iza that he began to panic. These were the very same concerns she had before she purchased the tickets to Paris, yet he managed to make it seem irrelevant to them being together.

— A French lady ate my Swiss cheese— She said.

We froze, what to do now? Do we still go to Paris? We have no choice, the tickets are non refundable. I was angry; I would have never predicted such actions and weakness from Cedric. I supported him and Iza fully all the way, they looked cool together.

— Where the hell are his balls?!?!? Why didn’t he tell us this before we purchased the tickets? You bought the tickets just a week ago, he knew this and he didn’t say anything to you when you were buying them. — I couldn’t believe it. This was just unreal to me, how someone can consciously pretend.

— He didn’t say it earlier because he was not sure if the girl and him would work out. So he waited, let us buy the ticket and then told us— Iza was upset. This situation completely shifted our plans and mood.

Current State of mind.
So French lady ate Iza’s cheese, but that’s ok, after two raclettes, cheese fondue and serious cheese overdose in Paris we realized that among all the different cheese in the world Swiss cheese isn’t all that.