The more we travel the more heights we see. It’s like the views are getting better and we don’t come across the same terrain.

After 10 hours on a bus going north of Lima, we arrived to Huaraz. A medium city surrounded by mountains. The plan was to come here and go trekking in the National Park Huascaran. We choose to hike the Santa Cruz trek, it’s a 4 day 3 nighter.
We choose an agency, paid them $100 and next day we were on the way to start trekking. I had no idea what we were getting ourselves into, I just went with the flow. Apparently, I forgot to check the elevation of our trek.
It was 6 of us, 4 tourists, and 2 donkeys, I mean a guy that came with the donkeys and our guide. 🙂
First day. Spent most of the early hours in collectivos ( packed minivans), and on public buses. After finally arriving at our start point it was a bit late and we had to pick up our walking speed to make camp before dark. To our first night’s camp was about 4 hrs trekking. 1Hr into the trekking up, down, and flat, I was sweating like crazy, my face was red and I thought I was going to pass out.

“Holly shit, I am so out of shape, the jungle and my dengue fever totally screwed me up. I can’t even walk for 1hr with out felling like crap”
The guide then informed us that today’s hike is simple and easy, and tomorrow’s is the hard one. Ha… What?! After finally reaching the camp, it was freezing, and the camp was near a fast stream. The 4 of us quickly started a fire to warm up. Too bad we didn’t have any kielbasa to grill, ohh I would do anything for that. Instead our guide was busy preparing us dinner, which of course was rice and chicken. It was then that I heard that we were up 3,800 meters above sea level.” No shit I couldn’t trek after 1hr. What is the height tomorrow?”
Like I mentioned it was 4 tourists, 2 of us and the other two were Simon and Anitra. No one really knew each other except Iza and I. We were all similar age and had a good time sparking up conversations. Listening to them I was really shocked and please that they have traveled almost everywhere. Anitra was only 22, and has been to India, Asia, lived in Canada, and now is traveling south America. You go girl! Simon had a similar history. Where in the world do these people get the money? Hmmm rich parents perhaps…
Second day. The killer of them all. Huffing and puffing for 4 hrs up a hill, climbing 1,000 meters higher to get over a mountain at 4,750 meters high, and walk for another 3 hrs down to get to camp. That was one of the hardest physical activities I’ve ever done. My triathlon was easier then climbing that fucking mountain. It seemed that it was only me, Iza was struggling a bit but was ahead, the other two were way ahead and our guide just kept resting and waiting for us.

Finally when I reached up the top, we was rewarded with an amazing view of glaciers, snow caps of the amazing Andes Mountains, and the bluest crystal clear lake down below. “wow, this is the shit, what!!! Amazing, it just keeps on getting better.”
It was so cold, but I sat there and ate my cheese sandwich, followed with a strawberry jam sandwich, and an apple. Freaking rice, potatoes, and bread. That is all they feed you on these treks. Walking down was much faster, but I don’t know walking down for me is sometimes harder then walking up.
Second night, wow, it was cold. When we reached the camp, we just got into our tents and sat there with all of our clothes on drinking coca tea to warm up. Iza was so cold that her lips were a natural plum. For dinner we got pasta, whoop whoop, it was just plain pasta with a tiny bit of sauce and onions. Is just getting better. Carbs carbs!!!
3rd day. Cruising on the flat terrain.Simon and Anitra decided to do the 3 day and 2 nights, so they were heading back to town.

While we walked up, to the Mirador view, where we saw yet another amazing view of ice caps and snapped away some jumping photos. The rest of the way was all down, and I mean down steep, my legs were jello and shacking, as I was cursing our tour guide for taking a short cut to come down faster.

The rest of the way, was easy going, flat. We passed many different angles of beauty, walked right next to that crystal blue lake that we saw from above the day before. Wow what natural amazement. The sun was shinning and we again had smiles.

We reaching the camp on the third day at 2 pm. A bit early. The sun was still shinning and we just sat there, stretching and not doing anything.

Towards the end of the night, it was just Iza and I, and the donkey guy and our guide. Neither of them spoke any English, so I just practiced my Spanish until we had nothing more to say, and we went to bed again at about 8pm.

4th day. Should just be called transportation. We walked no more then 2 hrs to town, got in a cab, then a rickshaw, and a colectivo, followed by a cab and we made it back to our sleepy hostel. That same day, we bought a ticket and headed back to Lima over night to connect to Cuzco.
We made it to Cuzco in 30 hrs… Where it all went down beyond my expectations. 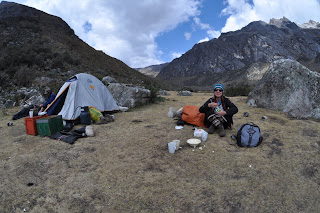 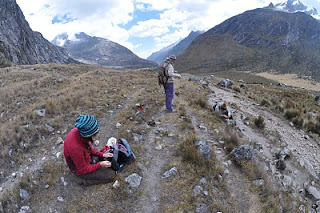 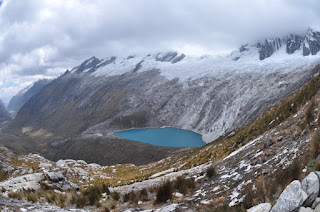 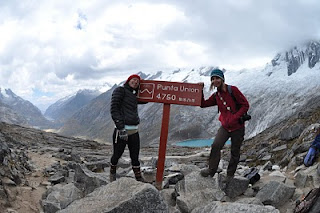 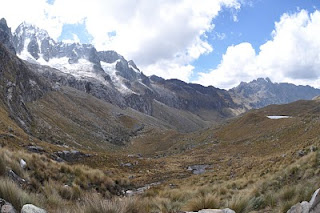 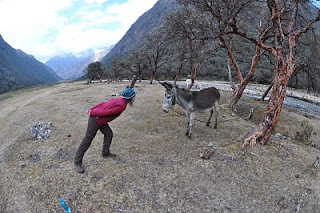 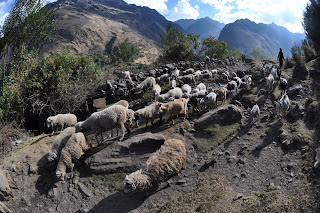 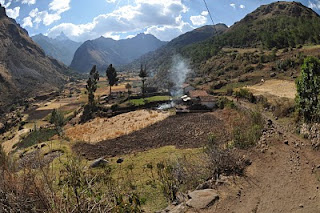