Skip to content
Sitting under a palm tree, staring at the changing colors of blue hues. The 7am, the 11am, the 3pm the 5pm and the best yet “the sunset”. Actually, I probably wouldn’t even know the amazing light changes exist if I wasn’t forced to chill. You’ve seen the Full Moon Party video
(http://youtu.be/7wO_Q2_1pRY), lots of fire, and when you play with it, it will burn! So here I am sitting burned on a chair that’s facing the changing hues, with my leg in a bandage, I have a vacation from vacation. 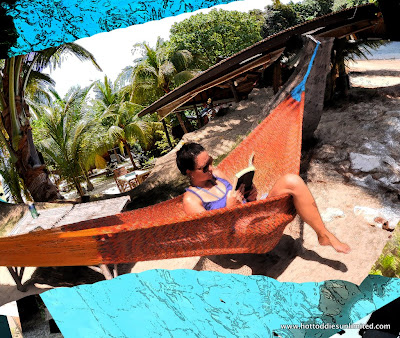 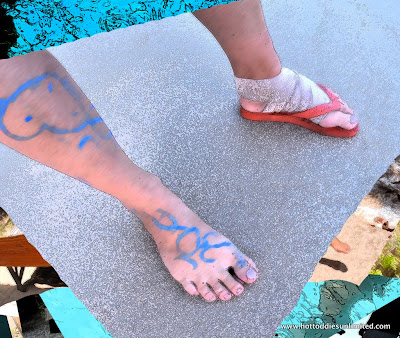 One day pass, two days pass, three days pass, five days pass, eight days pass while I swing on the hammock facing the blue water and Silvery Moon Bungalows. All day the sun is shinning, all day the wind is flying and all day I lay here smiling.
The Silvery Moon Bungalows is located on the south side of Koh Phangan, Thailand, 3km from Haad Rin on a strip of quietness, shallow beach and no speed-boat noise. It’s a place away from anything and everything, total relaxation. Some things are loose; the owner Sam is a one-hand man who does everything. He cooks, he cleans, he smokes, he wires electricity, and simply he is the man. Whatever you need he has it and he will put it on your tab. Easy going, trusts everybody and smiles everyday.
This place is unlike any other place we have seen. I’ll start by saying, what we are doing here. Complicated but easy to say, we are couch-surfing with Mariusz, a polish guy who is in love, (not with us), and who we met in Kuala Lumpur waiting online to get visas to Thailand. “Girls, when you get to Kho Phangan, give me a call and come to visit me.” Not to mention that the Full Moon Party was 3km away from his place.
“Has anyone seen my lighter?” asked one of the guys who just finished rolling a joint. The lighters are mysteriously moving from hand to hand, and never finding its original man. One rolls, they all smoke. They smoke in silence while browsing the digital world, roots reggae and occasional techno adds to the high. Each and every one of them is seriously addicted to Facebook, YouTube and marijuana. 2011 backpacking is a digital high. 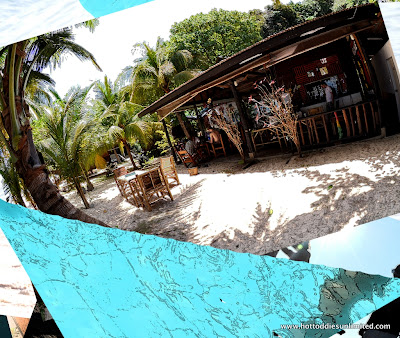 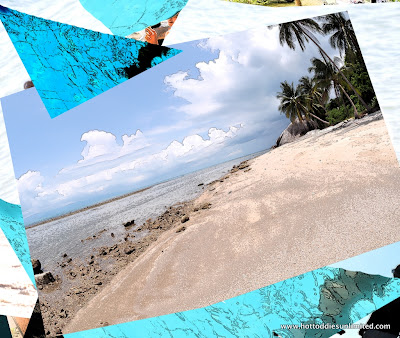 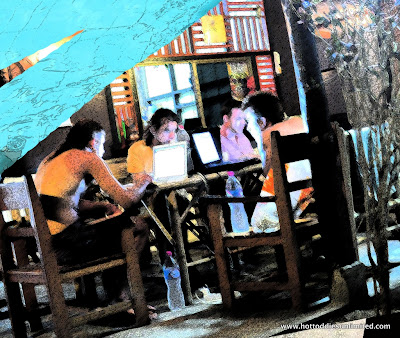 Let me introduce you to some of the dopiest and dopest people we have met “Same, Same but Different”. It’s an energy forced that brought “the wild”, “the weird”, “the stoned” and the drama to this mama.

Meet the people:
Sam, the owner of Silvery Bungalow, as stated earlier he is the man and the energy source that keeps moving.

Mariusz or Mario is our link to Silvery Moon. A body guard. A master diver, who dives every day till he will reach PADI. He is in love with a 23- year old Russian. A multi-tasker who can’t do two things at once. Accepts all the couch-surfers, hints the reason why 4 of us sleep in his room.  Our connection? Spiritually off, physically “close” as the three of us slept in one bed. He is the wonder.

Nico, the American who I talked to briefly is on a fluffy, hippie, herpie cloud. Now these are only my observations but he is living the Thailand dream or is it the Russian dream? “I love the Russians girls, they smile like kids and love to share”, he said. Oh yes, he is another one who fell into the Russian love triangle. He initially couched-surfed with Mariusz, and few days later disappeared embraced with the blond Russian. What is wrong with him? I can’t point it out to you, but there is something off, perhaps the fact that he is too nice? Or the “sharing is caring” part? When he returned, he was with the brunette Russian girl, the girl that Mariusz is in love with. No one around, just me in a hammock, they arrived looked around, and began to kiss passionately. WHAT? “Did I just see what I think I see? Didn’t he leave with the blond Russian?” Before the rest of the people followed they managed to get wet, and eventually all sat around a bow of psychedelics mushrooms for a vividly spiritual journey. Just the three of them, day light, people around, beach setting. Nico experienced life to the Full-ness- Rushin-ess.

Who are the dancing Russian girls with the magic touch? The blond, Nicole and the brunette Julia, in their early twenties, straight from Moscow. Girls with no boundaries that love to kiss, touch, and massage everybody. Girls who are having the time of their life in Koh Phangan, “Sex, Drugs, and Laughs.” Three-some-ness, sharing-ness, open-ness and happy-ness is what describes them best. I can’t say much and I can say a lot. Breathless I stared as they mingle, giggle, puff and dance. The two Porn Geisha can put on a show. Yet, the warmth and openness projects far. Keep wondering.
“Ok girls, what do you think I should do, Julia stated that she is not interested, she had sex with the other Russian and she just wants to be friends? Asked Mariusz while the three of us laid in bed. “Mariusz? Have you been drinking? You smell like Chiang? Seriously, open your eyes!” Half the night was wasted as Iza and I poured our thoughts. Only for Mariusz to act like a dog in heat the following day. “PSSSTTT, she is a freebie, let her fly, be and fuck.”
The night is near, the sun just set, mosquitoes are hunting, the puffing continues, a place of unity, sharing, healing, hating, eating and trusting. TRUST is the key element in this place. My i-phone, his Apple, her Dell, a wallet, money, and all personal belonging are all out. No thief and no wrong thinking just “sharing is caring is a way of life” mentality, or maybe the stoner mentality. “ Wanna puff? Is good, take a drag, let yourself free, enter the vivid chill.
The “Barrff!” sounds are coming from the above terrace where Mariusz’s room and two other rooms are located. “ I don’t know, someone should check up on Pascha” Iza raised her concerns, as Pascha is dying slowly. When I say dying slowly, literally said.
Pascha, a Russian guy, who has been living in the Silvery Moon for the past 3 months and who voluntarily decided to fast.
Definition: (FAST – verb – we must fast and pray: eat nothing, abstain from food, refrain from eating, go without food, go hungry, starve oneself; go on a hunger strike. ANTONYMS eat.)
His fasting plan included no eating for 10 days only water allowed. I never got a chance to talk to him about it. I don’t know his motifs for fasting and I don’t really know him. He is a quiet soul that carefully chooses who he connects with. Or maybe it’s the language barrier. As I lay in the hammock he laid in his room, fighting the hunger, which turned into black shit purging. We heard him purged, we saw him struggle, I can only imagine his inner warrior, strength and self-awareness. After 10 days he successfully did it, he did not eat anything. His first food intake was a watered down freshly squeezed orange juice. Maybe one sip, and more water, following day he had another sip and asked to be taken to the hospital. Smart move, the Thai heat kicked in and he was hanging on his last thread.
Are you starting to feel the vibe? The surreal vibe, a vibe where Iza and I kept questioning, a place where the unexpected randomness became expected.
Yes? No?
Either way let me introduce you to the most mysterious soul we have met yet. Mischa another Russian. By the way there are many Russians in Thailand. Mischa is a guy who took LSD and swam naked in the sea. His vivid mentality makes him quiet and observant. You need time and patience to understand his energy. He is a mysterious one of a kind apple. Bite it, taste the juice and share. What is he thinking about?  Would be my question, but I don’t need an answer, just let him be. His laugh is what distinct him most. He He he… I can totally hear it in my head.
Jo Jo, Liam, Lee, Elsa, Elisa, Haris, Polys, Carlo and the locals are just few other peeps who roam the area and who have a strong presence in this joint. They are part of Silvery Moon, they are the standing blocks that make up this place. Unique stoned souls are in the house.
Minutes, hours, and days pass as we slowed down our movement. I opened my eyes and I looked for my hammock therapy. NO, not today, I will not enter the cocoon. One more day and I will fall into this Silvery craziness. I need oxygen!  Just like that, I spoke and it came. I asked the right person for dinner who lead me to the other realm of life.
Meet the Cyprus Crew. Three souls who’s energy is so strong and unique that I sit here wordless thinking how to start…
To be continued…