It’s pitch dark, the frogs are ribbeting, Iza is taking a walk and I am swinging on a hammock slightly buzzed. It’s 2:30am and it’s our last night on Don Det Island.


— Sorry, it’s just not going to happen, I am not feeling it. I am in a totally different state of mind, lets just be friends.
— I repeated this in my mind as I stared into the darkness. He was a good looking Argentinean with so much passion and desire for a one night stand.


Si Phan Don, an archipelago of sandbars and rocky islets surrounded by the Mekong River. It’s definitely a highlight in all guidebooks guiding through Laos. Traveler’s paradise for relaxing in a hammock and observing the laid back style. The most common and often visited islands are Don Det and Don Khon. Don Det has cheaper bungalow accommodations and is busier with bars and restaurants. Don Khon is home to two impressive waterfalls and from the south tip of the island is where you can spot the rare Irrawaddy dolphins. It’s also a fisherman’s paradise; they can be seen all over Mekong cruising on their tail boats. Rural lifestyle, rice paddies, turquoise water and butterflies is what sparks Si Phan Don’s character. — We are ready to experience real tranquility.


We arrived by boat to Don Det on Friday, July 8th. Instantly we realized that three days is not enough, unfortunately our Laos visa runs out on the 11th and we have to leave the country. It was noon, the sun was beaming and we trooped fully equipped in search of a cheap place. Majority what we’ve seen were very simple bungalows equipped only with bed and mosquito net with common shared bathrooms.


Sunset side was our side; we found a relatively new bungalow that was facing rice paddies. In full heat, sweating like pigs it was an easy choice and this was the winner. The view of fluorescently green rice paddies, opened pink lotus flowers, ridding bulls and working woman is what made the place an icing on the cake.


We quickly settled in, found the island’s herbalist, Mario, and before we knew it we had munchies. — It was so worth dragging our giant watermelon from Pakse, — I said. After the first bite we both entered a state of silence and the juicy flavor expanded our imaginations. — This is a gooood. — Iza smiled. Swinging on hammocks, we talked, puffed, laughed and were happy to do nothing. During the afternoon we cruised on foot, it was a good way to check out the local life and a bit of exploring snapped the life to stills. 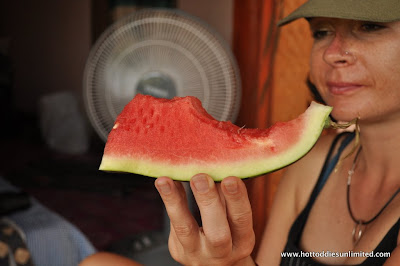 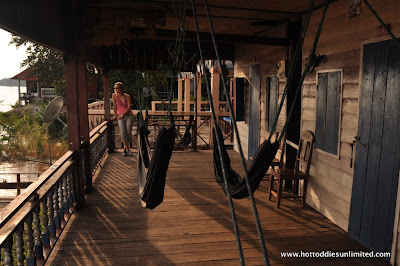 — Have you guys tried the food here in Mama’s kitchen? — Asked one of the guys staying two bungalows down. — The Lao omelet is the shit, you have to try it. — He convinced us, and that’s how we spent an entire day hanging out with Mama and her kitchen. Mama’s restaurant became the main place for our energy. Her unhurried attitude made her food flavorful and delish. Additional to the tasty traditional Laos meals like Laap, Sticky Rice and Spicy Papaya Salad she also served:


Her menu alone is why three days is not enough on the island. We want to try all of Mama’s odd creations. (Note to self we need to come back soon) The omelet did kick ass, actually I don’t know why it was called an omelet its more like a pancake stuffed with veggies and meat, served with rice noodles, fresh cabbage and spicy peanut sauce. YUM! Ohh, I also need to shout out the banana chocolate pancake. It pleased our taste buds; the homemade chocolate sauce was an unforgettable pleasure. — I am drooling.


The sun went down and it was time for some mingling. We found a bar, ordered a Mojito with Lao Lao (home made whisky from sticky rice) and watched Shrek III. While leaving we were invited to shoot pool by a happy bunch. — Yes, I would love to play some pool. — I’ve been talking about playing pool ever since we were in Vang Vieng. This was awesome. I don’t think Iza was as happy about it, she refused to play and didn’t seem to care. The bunch turned out to be all Spanish speakers. Yey, I love to hear some “espaniol” good way to practice as the last time we spoke in Spanish was in Argentina. It was a nice mix, Charlie and Lus the two Argentineans, Madi the Spanish girl, and Diego from Chile. After one game we called it a night as all bars and restaurants close at 11pm in respect for the locals. It was time to evacuate.


Morning sun shinned and we hopped on bicycles for a ride through the islands. Scenery felt a bit like Bali, with many rice paddies, buffalo workers and rice pickers. I will say —Bali on crack — it’s more, more and more. More green, more workers, and more bicycling. Didn’t get to see the dolphins but we did see crazy rain on the Mekong River. The monsoon stopped and we continued in the search of the gushing waters. Holy shit the The Khon Phapheng Falls were super impressive. WOW, we were not expecting it to be so wide, rapid and laud. The Mekong’s color of the water made the falls be quite unique and photo snapper.


Slowly we rode in the afternoon’s atmosphere and passed many tourists in a need of bicycle fixing. The bikes were a piece of shit, rusty, dirty and uncomfortable.


The night approached and once again we headed to the bar to mingle with the Spanish. We all sat on the floor around a table and quickly fell into conversations. I hit it off with Charlie, we spoke in Spanish, it was awesome, I am quite proud of myself I understood everything and the most important thing was that he understood me.  — Solo espaniol? — Diego looked at Charlie and asked him if we were only speaking in Spanish. Then he turned to me and spoke really fast Spanish. I have no idea what he said; I just nodded in agreement. Sometimes you got to pretend. Before we knew it, there were three more Spanish speakers who joined our pack, now it was the Spanish invasion. Two Polkas and the Spanish speakers, quick introductions and acceptance; quickly everybody were speaking at once. Opium pipe entered the cipher and bound the Spanish group together. Iza and I opt out and enjoyed Beerlao.


The bar was closing and we were not ready to sleep. We brought the gang to one of the Spanish guys bungalows that had a nice balcony and a space for us all. Cards were in effect, joints were sparked and we continued to socialize. 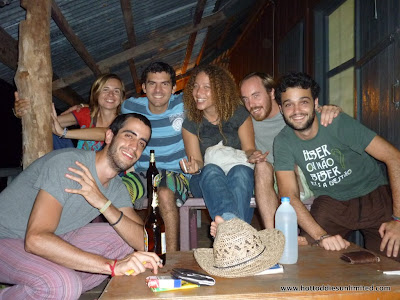 — It’s an easy equation, 2 girls and 2 guys. You come to stay in my bungalow and Charlie goes to stay in your bungalow with Aga. — said Diego to Iza.


Yes, that is a good equation and sounds like a happy night, but not tonight. We were both not feeling the act and sometimes you got to say — Not now.


— Shit I need to go to sleep as I promise to practice yoga with the local girl at 7:00am.