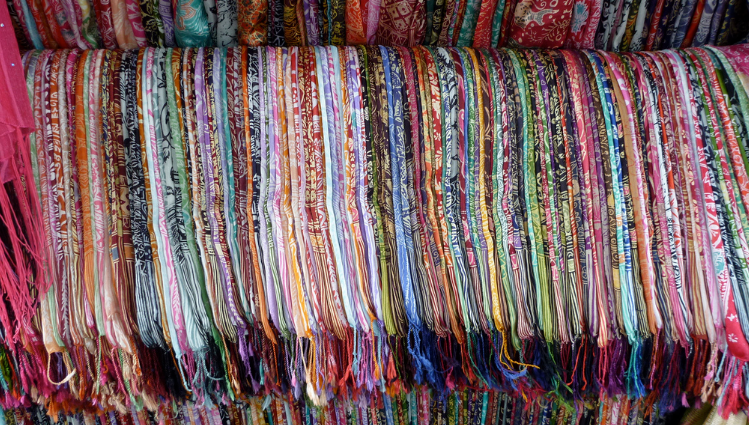 Our teen daughter Rani is a big fan of Bali’s second-hand clothes outlets.  Her mother is a fashion designer, the malls are full of the season’s stylish clothes, and high-end stores in Kuta’s tourist glitz zones offer brand labels, but it’s off to the used clothes stores for Rani.
“Whatever colors are going to run have run, whatever shrinkage is going to shrink has shrunk, and whatever seams are going to tear have torn,” she says.  “Those clothes have lasted.  It’s like evolution. Survival of the fittest. Plus you can get some really cute things for really cheap.”
Hard to argue with logic like that.
One day last Christmas season, she heard whispers about a used clothes market called Pasar Kodok in the town of Tabanan, some 15 miles west of Denpasar, where many other traders bought stock to sell.  (Pasar Kodok translates to “The Frog Market”).  She insisted on going. Her mother and I picked her up at a friend’s luxurious Bali villa overlooking the ocean where she’d had a sleepover. Her family had won a contest through Roomorama and got a weekend for free, and me being a surfer, I pondered the excellent surf just off the coast that I was currently missing.  Ah, well. It was Family Time, even if it was a shopping expedition down potholed back lanes to a sprawl of hot tin-roofed shacks for second-hand clothes.
The traders in Pasar Kodok are from the island of Madura, off West Java.  There’s a system: each narrow stall, crammed with rows and racks of garments, sell the same type of item. Girls jeans, men’s jeans, dresses, tops, T-shirts: each under its own roof.  These clothes (mostly smuggled from overseas) are already pre-sorted by the mysterious Big Boss Man and sold in bulk to the traders.
Rani used her special ATM (called a father’s wallet) and withdrew $20 in the local rupiah. More than enough, she said happily, and off she went spelunking on her own through the maze of shops. I stuck with my wife, dutifully tagging along the rutted paths from shop to shop, all crammed together. The blazing tropical sun beat down, humidity bloated the air. Bread could have baked under those tin roofs.  My wife, being a woman in the presence of clothes for sale, approached a nirvanic state.  At some point during a stretch of uncertain time measured by the depletion of my bodily fluids in the form of sweat, she’d picked out two pairs of trousers and used her persuasive bargaining powers to get the trader to reduce the price. He was a genial fellow in flip-flops, sarong and singlet T-shirt.
“Three dollars each!” she said, showing them off to me.  “And they fit perfect!”
“Are you done?” I asked.
She gave me a look.
Stupid question.  “There’s a drink stall down there by the road,” I said. “I’ll wait there.”
I ordered an iced lemon juice.  The proprietor served it and sat down with me for a leisurely chat. He was the one who told me how the market worked.  “We never see foreign tourists here,” he said.  “Even local tourists hardly know about this place.”
I said I was a resident, not a tourist, and my daughter had heard about Pasar Kodok from a trader at another market.
“I hope she’s careful,” he said. “The Madurese are famous for their magic. The shopkeepers here will spell you into buying more and more and more.”
My cell phone rang. “Dad, where are you?” Rani asked.
A few minutes later, she appeared out of a side lane carrying a plastic bag overflowing with clothes that she dumped on the table.  “I need more money,” she said.
The bag was big and near to bursting. “Isn’t this enough?” I asked.
She gave me a look. Like mother, like daughter. Another ATM withdrawal.
Some time later, as immeasurable as time can be for a man with shopping women, the shopping was finally done.  On the drive home, Rani and her mother conducted an impromptu fashion show in the car, holding up tops and skirts and dresses and pants and oohing and aahing.
I had missed the day’s surf, but so what. The two women in my life were happy, and karmic blessings would surely flow my way.
(The best way to get to Pasar Kodok is to hire a car with driver who can ask directions of Tabanan residents).